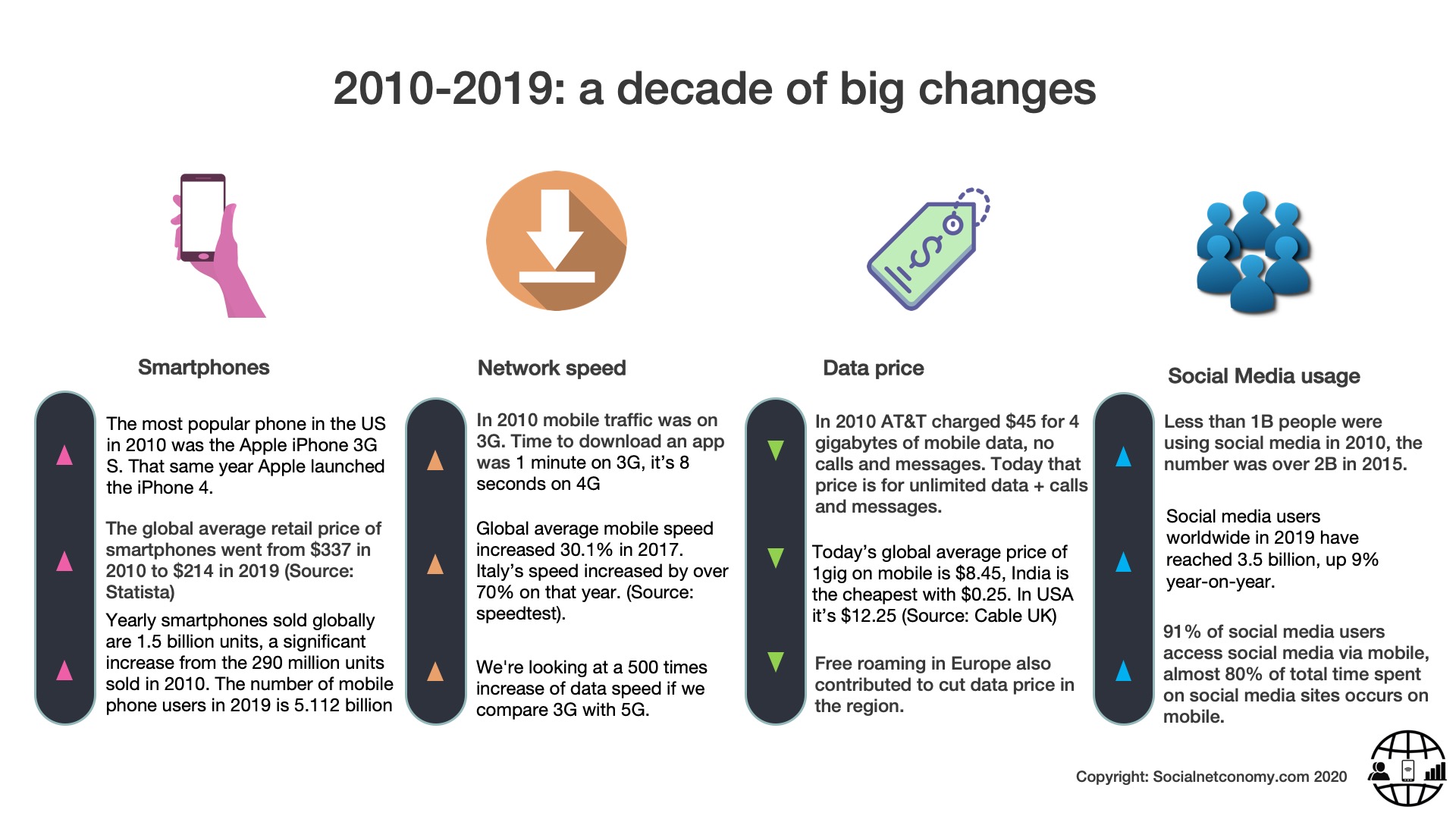 Today, thanks to the available technologies, the broad access to them, and mainly by the large use of social media, digital transformation is something companies have no longer a choice to deal with: it’s a necessity to survive.

What’s interesting to me is, whatever industry or company I dealt with, the same people that 10 years ago were suspiciously watching those moving their first steps on social channels are those today who proudly embrace it. Brands have finally understood they must go where their customers are. In the most developed economies more than half of the population uses social media on a daily basis.

Still, many companies are hardly catching up and wondering how to properly leverage the available digital channels, and some companies still struggle to maintain a proper presence. Some have not understood yet the most important strategy on social media is to be social and not only focus on shooting media. Meanwhile, new trends are already emerging and they are likely going to change again the rules.

10 years ago we were mainly talking about Facebook and Twitter, there was some Linkedin usage for B2B, Google was trying to enter the social media game with Google+, Pinterest was rising in the US (and now it’s starting again to push in additional markets), I lived in the US in 2010-2011 and streaming was quite broadly adopted in the US with Pandora for music and Netflix for movies moving their first important steps. Streaming actually started in 2007, when services such as Netflix, Spotify, Deezer started offering their service. But 2007 was still not the right time for internet usage on mobile: only a few could have access to the internet through their mobile phones, prices for mobile data were still too high and connection was still slow, wifi was not supported everywhere, smartphones were not that smart yet, with the exception of the iPhone and a bunch of few more.

In case you forgot, this is what the situation was at the beginning of the decade:

But it was not just about mobile phones. There have been a number of factors taking us where we are today: smartphones, networks speed, cost of accessing the Internet (do you remember we had ridiculous data plans with something like 500 MB of traffic per month?) and social media. Let’s be honest: we have all moved from a social to another, creating profiles on Geocities and Myspace, then moved from time to time to many others leaving pieces of our lifelong photo albums all over the internet before we finally gathered all together on Facebook, to stay.

Here is a summary of most important changes over the past decade that are worth considering:

There are additional elements to consider to have a more complete picture of what happened in the past decade. I recently came across some interesting data analysed by Data is Beautiful, by a first-year PhD student, data geek who has created some really powerful videos using data from various sources.  Something interesting emerges from these videos, and it is the fact that – exactly like analyst firms expected about 15 years ago, the Asian digital market is growing faster than that of the US and Europe.

Likewise, it will be Asian digital media to set the rules in the coming decade. In this first video, you will see the most popular social networks in the past 16 years. Two elements appear evident: the rise of Facebook and Instagram combined and how fast TikTok is growing more recently – and I expect it to grow even faster in the next couple of years.

Why is this happening?

As usual when considering markets, we need to understand in which context companies (and their clients!) operate in. The second video I want to share from Data is Beautiful shows how internet users have grown, by country. We all know one of the things that Internet has given us is the immediacy of sharing of information across different geographies. And remember to consider this, combined with a faster development of social media thanks to all the elements summarised above. There is an evidence of the amazing growth of Asian population online and this explains the fast rise of selected social media over others. And while there have been more Chinese internet users since over a decade, it’s in the past few years that the influence of Chinese economy and Chinese digital services have started to emerge and become popular in other regions.

But not just social media are going to be affected by these emerging trends. Digital entertainment is another sector that is going to be affected soon. It’s yesterday news that Tencent has taken a 10% stake in Universal Music Group, following previous investments in the entertainment space, and only a few weeks ago Bytedance (owner of Tiktok) started testing its own music app in some countries.

And if this is not enough yet, also payments are going to follow the Asian wave. I am sure you heard that Alipay is now available and actually booming in Europe – I recently saw a Chinese speaking Alipay advertising in the city center of Milan alerting tourists they could use Alipay in shops in Milan. Quite a thing.

And I was actually wondering why they decided to do so until I found what are the most popular countries by tourists in the world in yet another video of Data is Beautiful. Chinese tourists are growing exponentially and some countries are preferred over others. Likewise, tourists in China are booming too, and also foreigners are now allowed to use Alipay when visiting China. Needless to tell this is driving even more Alipay adoption.

This is a good exercise for consumer brands who want to expand or improve their geographical presence: consider where there is a higher tourists presence to advertise their global products. Travellers are quite often early adopters and likely good influencers of their peers.

There is a last – and not least element – I believe it’s worth considering when it comes to why the Asian economy is having a growing impact over the internet and why they seem focusing on some services we use every day from our mobile phones rather than others.

According to Sandvine’s latest Internet report, video streaming, audio streaming and social media are all in the top 10 of internet traffic.

Now think about the data analysed in the lines above, and see how we shall prepare to a whole new wave of entertainment and apps and services coming from the far East and likely having those functionalities combined, fostered by the introduction of 5G.

Have you planned your next decade moves yet? What are you focusing on?