The #epicfail of Dolce and Gabbana: big trouble in big China.

The #epicfail of Dolce and Gabbana: big trouble in big China. 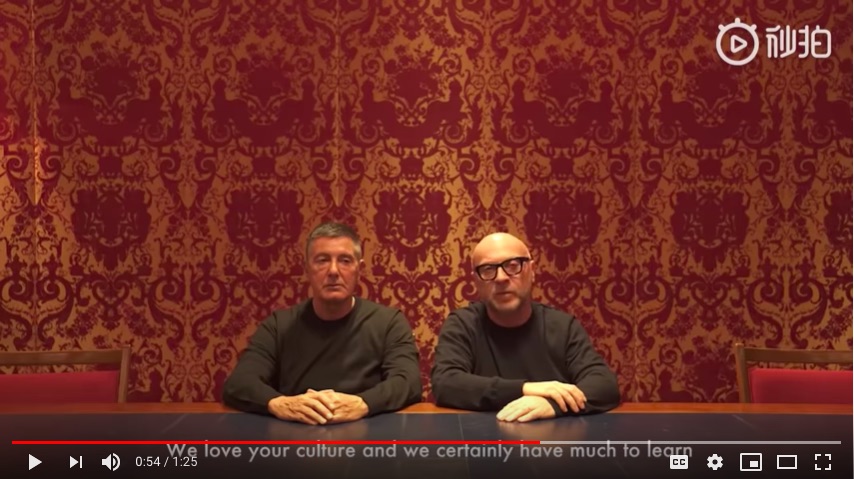 Unless you spent the last few days on another planet, I am sure you heard about the incredible snafu of Dolce and Gabbana – the famous luxury fashion brand- with China.

The brand Dolce and Gabbana, with the aim of promoting a forthcoming event in China launched on their social media 3 video ads featuring a Chinese woman struggling to eat pizza, spaghetti and a cannolo (a typical dessert from Sicily) with chopsticks. The situation was then made worse by audio comments on those videos. In this one, about the cannolo, the voice asks “Is it too big for you?”.

The videos and comments spread rapidly on Chinese social media, drawing accusations of racism and calls for boycotts from celebrities. The most famous Chinese e-commerce websites took down all the D&G products.  The noise also forced D&G to cancel their fashion show in Shanghai the day before it was due.

Can you imagine what this means in terms of economics for the brand? China is the 3rd global market for luxury and you don’t want to eliminate your 3rd biggest market for your business.

At some point some offensive sentences about Chinese people appeared on their social media accounts as well, but those latter were then canceled and posts on the accounts being hacked appeared. Users kept commenting highlighting the fact it was not the offensive sentences, but the 3 videos to be irritating and insulting. So it looks like neither the stylists nor their communication / branding / marketing staff got the point.

Which is even worse.

On social media protests continued for all week, and comments on their Instagram accounts highlight the fact that users comments kept being canceled. This of course made the situation even worse.

Finally, today, the stylists took time to apologise, or at least this is what they were trying to do, with a public video that somehow shows it’s still uncertain they have got the point.

Here is their video:

I remember when I was working in the US we all had a training on harassment. I remember as an Italian I was told nobody should have commented or made jokes about my accent when speaking English, for example, because that was harassment, and who committed that would have been fired.

The #metoo movement surely clarified what sexual harassment is. But harassment actually covers a wide range of behaviours of an offensive nature. Harassment is a behaviour that demeans, humiliates or embarrasses a person. In the legal sense, these are behaviours that appear to be disturbing, upsetting or threatening. It evolves from discriminatory grounds, and has an effect of nullifying or impairing a person from benefiting their rights. When this behaviours become repetitive it is defined as bullying.

And this, to me, is the case. It’s not the US, but we are in an international context, and when we relate to someone whose culture is different from ours, we shall simply act the most polite was we can to be sure we don’t create any problem.

Now, We are not talking about the food kiosk behind our office, we are talking about Dolce and Gabbana, a worldwide renown luxury brand, the one that dresses celebs, the one that usually communicates with sensual and romantic atmospheres. This is not the jokes fan-page on Facebook that posts a meme every day, this is a business with a turnover of over 991 million euros in 2017. Quite enough to pay for a decent communication and branding strategy that understands the importance of cultural differences knowledge and respect.

And there’s no day since the broad adoption of Facebook and Instagram and Twitter and Linkedin that I don’t feel pain and pity for all those who expose themselves so much and in such a bad way. Social media have become a place of hate and fake. And only those who can shall set the standard and raise the bar as high as possible.

Having the ability to “broadcast” in front of an enlarged group of people has given too many people (and brands) the impression that communication jobs over digital require almost no experience. After all everyone is on social media – they say.

The point is, social media are today the most official channel of communication a brand has. It’s no longer the pictures on fashion magazines – who nowadays have become less considered, with all information instantly available online and from all sources we like – it’s no longer the TV spot. And while we live our life between a digital solitude of our working day, personal playlists on commuting,  and Netflix for our evenings, we are understanding more and more the importance of respect for others. While our politicians struggle to separate us, we understand the importance of staying unite. While our countries are far away from each other, the Internet is our common country. And especially for a big brand such as Dolce and Gabbana, I would expect these changes affecting the emotional side of our digital life to be known and understood, if not embraced.

And to do this, brands need the get back to the same level of experience and seniority that used to look for in the past, when searching for their brand and marketing and communications people.